Having a Beer with Steve Cripps… IMS2015 is Your Year!

Being at one of the early 2015 IMS committee meetings I heard about some event called “having a beer with Steve Cripps”. I must have missed the meeting prior where the concept was discussed. I did not take it seriously and thought it was just another IMS idea that had beer in it. Seems like we have a lot of those!

I know of Dr. Steve Cripps – by name - from his book and work in the use of load line contours for matching PA’s. In fact, the philosophical subject comes up periodically at work. To load-pull or not to load-pull and use the “Cripps Method”…now that is the question.

I also know Steve is a regular attendee at IMS and personally I like the idea of grabbing a beer with him to get to know him.  Meeting new people and seeing old friends in the industry is one of the facets of IMS I really enjoy. 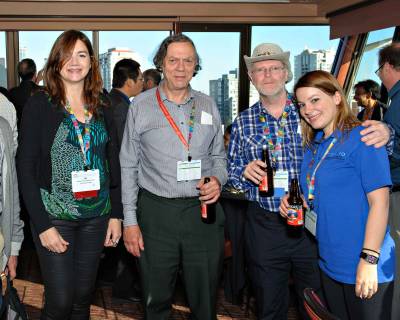 So while at 2014 IMS in Tampa and after a long day in presentations it was time to grab a beer and head over to the dinner reception. I got my cold one and then got in a rather long line for the food.   Standing in line, I saw a guy with a beer in his hand walking and looking at the line as it was getting even longer after I got in the queue. This guy made some comment about the line and I laughed and we struck up a conversation. I kind of pulled him into the line where I was as we kept talking.  We both agreed that the beer felt perfect after a long day of presentations. He had a subdued English accent which made me more curious to whom I was speaking with. So as I glanced down at his name on his badge I realized I was now “having that beer with Steve Crips”. The IMS committee must have played a fast one on me to set that up so fast and behind my back even. But wait, they said 2015 IMS in Phoenix …so the conspiracy theory was wrong.

This chance meeting only happened because we both were open to say hello to someone new. At IMS we all have something in common so reach out and say hello to the guy (or gal) next to you. You never know who you will meet or maybe who you are yet to know!


No comments made yet. Be the first to submit a comment
Powered by EasyBlog for Joomla!